Commercial high rise buildings began using Glass Fiber Reinforced Concrete (GFRC) panels as façades in the early 1970’s. These panels are thin and lightweight compared to traditional pre-cast concrete panels, which decreases superimposed loads on the building. The GFRC facade panels were constructed with a long span that flexed significantly under wind loads causing severe cracking and leaks.  HJ3’s carbon strengthening system was able to confine the cracks and seal the panels from further water penetration. 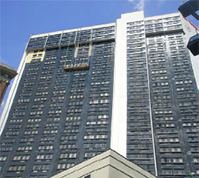 Wind loads caused the building’s GFRC exterior panels to fatigue and crack. The panels were constructed at a long span that left the GFRC panels susceptible to cracking. In addition the panels were secured to the building using a rigid anchoring system that did not permit movement of the panels. As the GFRC panels cracked, moisture began penetrating the cracks and creating mold
The surface of the GFRC panels was cleaned with a high pressure water blast. All cracks were injected with a high strength epoxy. HJ3’s carbon fabric and resins were pre-cut and pre-batched to help the installer easily quilt the carbon system around corners and expansion joints. After installing the carbon repair system, a UV resistant gray top coat was painted over the surface of
the carbon fiber to meet the client’s expected aesthetics.


HJ3’s carbon fiber system strengthened the existing GFRC panels to resist wind loads, cracking, and fatigue. The material also served as a waterproofing membrane to eliminate moisture penetration. The HJ3 carbon system created a direct cost savings of $3 Million when compared to the cost of replacing the existing facade with new GFRC panels. Finally, residents were able to stay in the building throughout the entire repair process.
[jwplayer mediaid=”6524″]
View video on YouTube