HJ3 Composite Technologies, LLC., based in Tucson, AZ, has just been named the Blue Cross Blue Shield “Best Place to Work” at the 2014 Copper Cactus Awards! Since 1997, the Tucson Metro Chamber of Commerce has been recognizing local small businesses and leaders that make a profound impression on their specific industries, employees, and communities. The Copper Cactus Awards, presented by Wells Fargo, serves as a showcase of the companies that have been judged “best of the best” by their peers.

More than 400 companies and individuals were nominated for the prestigious award, and of them, 52 businesses and four business leaders across Southern Arizona were chosen as finalists. The awarding categories included Best Place to Work, Small Business Leader of the Year, the Charitable Non-Profit Business Award, Innovation Through Technology Award, and the Business Growth Award. HJ3 was one of 14 exceptional small businesses elected as finalists for the Best Place to Work Award; other finalists included Nextrio (an IT consulting company based in Tucson), Technicians for Sustainability (a solar energy company), and Tanque Verde Ranch (a pristine 60,000 acre ranch nestled among Tucson’s Rincon Mountains).

Focused on implementing sustainable solutions for strengthening our world’s corroding and degrading infrastructure, HJ3 manufactures, engineers, and installs advanced composite systems that have been used on over 10,000 successful applications worldwide. HJ3’s patented carbon fiber composite systems are stronger than steel, lightweight, corrosion resistant, and offer superior chemical, abrasion, temperature and fire resistance. As the world’s infrastructure continues to degrade, with an estimated price tag of $6 Trillion dollars and spending gap of $4 Trillion dollars in the U.S. alone, HJ3 allows owners to do more with less cost and less impact to the environment. 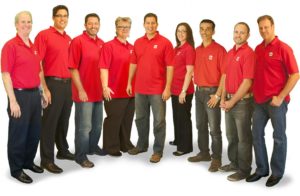 HJ3 won the “Best Place to Work” award for a number of reasons, including the active atmosphere that buzzes with energy, excitement, and determination. With 15 consecutive profitable quarters and 412{f00316eaeff19fc4d3daa6454136ee4db9a0ad1868aa2a79e58a2db09827821d} revenue growth in the last three years, the company’s physical growth is known and felt by all who contribute to it. High-fives and cheering accompany moments of intense focus, and personal growth is valued just as highly as professional growth. HJ3 provides a culture that’s dedicated to the service of others; the team has committed 1,000 hours of community service every year through a philanthropic arm, named “George’s Dojo” in honor of the late George Salustro, HJ3’s former production manager. From the Cystic Fibrosis Foundation of Southern Arizona to an interactive science museum called Tucson Science Works, and from Habitat Humanity to the Salvation Army’s “Adopt a Family” program and countless other charities, HJ3 encourages team members to lend a helping hand wherever possible.

The Copper Cactus Awards Ceremony kicked off with a cocktail reception, followed by dinner and awards announcements, and finished with an after party to celebrate the hard work and dedication of Southern Arizona’s best and brightest.